........and there was!
For ages now I have been squinting and straining my poor old eyes, those ocular instruments of mine, when I sew late into the evening. Of course, if my sewing table was positioned under the central light, this perhaps would not be a problem. But, being a gal who embraces the aesthetics of a room, my table is positioned near the window. During the day, Old Man Sun radiates his embracing rays of sunshine into my sewing room, warming both my body and my soul. Not to mention of course, when I sew, my outlook is a very pretty one of our garden, where there is always some flower nodding it's pretty head towards me.
So action needed to be taken. I had pondered this problem for a while, and whilst I had seen various lamps that would illuminate my space rather brightly, they were either a little expensive, nor pleasing to my li'l eye; and of course if I chose a light  that would hang from the ceiling, it would cost a bomb to have installed by our friendly sparky.
So.........what to do, what to do??
Then I remembered that a li'l while ago I had espied a rather rusty light in my husband's man cave....the shed. He has used it occasionally when he tinkers away in a little dusty corner of his shed. Now there was nothing that set this light apart from any other light. It was bottle green in colour (not a hue that sets my heart racing with joy) and just a tad 'normal' for the likes of my sewing room. Indeed there was many a prettier light in the lighting store!!

So, with my heart in my mouth, I stepped over the threshold of the man cave, where angels sometimes fear to tread; and claimed the rusty artifact for my own. It's okay....my husband gave me his blessing, though I must admit, he wasn't at all convinced that I could revamp this rather rusty beacon of light into a funky decorative statement, befitting of my bright and pretty sewing room. 'Oh he of little faith'!! So I whipped it away and started some fixer-uppering.

Now, in my mind's eye I envisioned this rather 'plain Jane' light being transformed into an objet d'art.....a thing of great beauty, that would enhance the aesthetics of my sewing room. 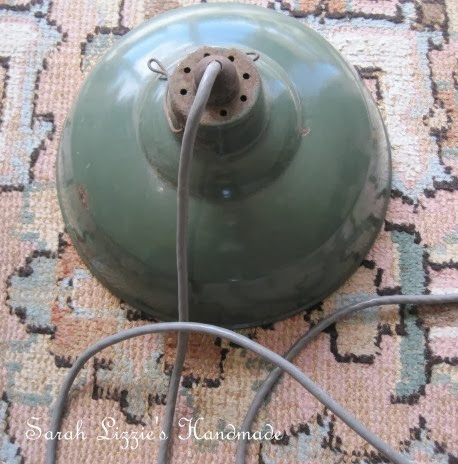 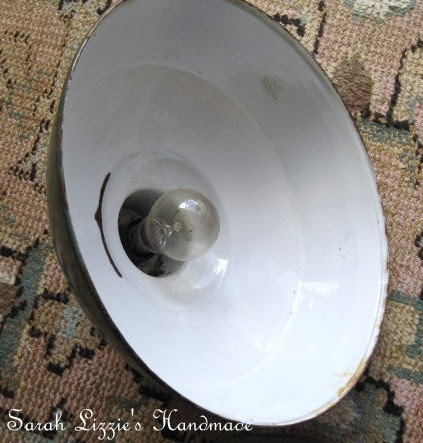 So I gathered some Mod Podge, a paintbrush and an old book on roses that I intended to rip out photos and decoupage them all over the outside of the light!. Oops....there I go again, defacing a beautiful book.....it seems to have become a regular occurrence on my part. Oh well....not to worry....it's not as if it is the only book pertaining to the subject of botany and gardening, that sits in one of the many bookshelves that reside in our humble abode!! 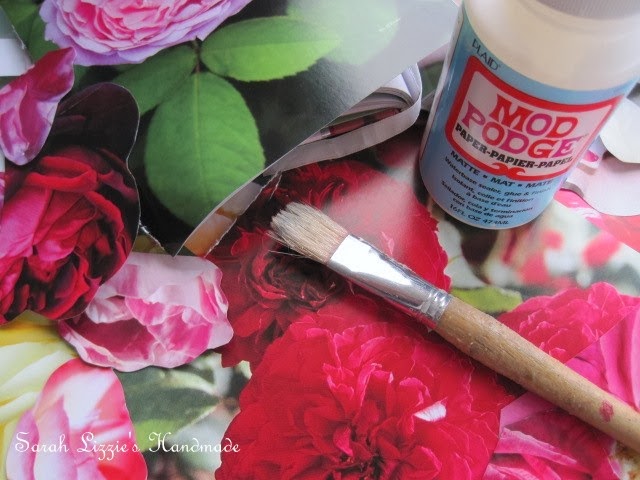 One by one, I cut out the  photos of roses, covered the back of the photos and the light with the Mod Podge and adhered them to the outside of the light, until it was covered with a smattering of pretty roses. Alas, there are no photos of this process as unfortunately I was 'knee deep' in glue!! Then I covered the lamp with layer after layer of Mod Podge. I might add that there are many more layers of Mod Podge to be applied, to help the photos meld into one overall decoupage surface! I will do this later on as I am much to impatient to illuminate my sewing space!! I then hot glued ric rac around the bottom on the inside to cover any untidy edges. 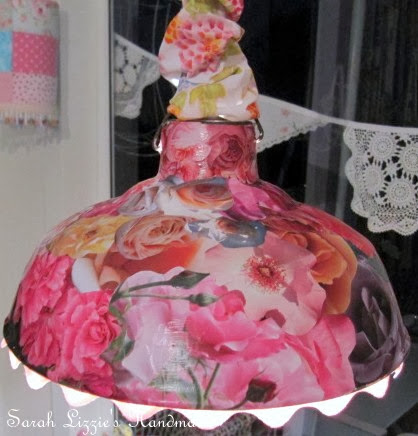 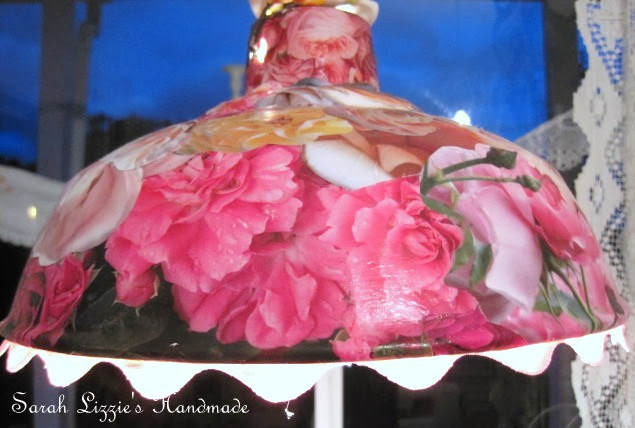 Now.........there was the problem of the ugly grey, metres long length of electrical cord. Oh dear......quite simply....U G G E R L Y!!!!! AND.....certainly would do nothing to enhance my lovely room!! Why oh why can't electrical cord be a pretty mauve, or perhaps  fuchsia pink or azure blue?????
So, of course I lookity looked in my fabric armoire for a fabric with which I could cover this monstrosity of an electrical cord. Bingo!! Of course there was a brightly patterned fabric.....in fact there were several. I chose an old doona cover that I had unearthed in an op shop for the proverbial song. I cut  several lengths (3 times the length of the cord)  approximately  20cms wide, stitched the lengths together, folded the length in half and stitched along the length to make a long tube. Then I threaded the cord in the tube gathering it in the process. My husband drilled several holes in the ceiling, to insert toggles, holding the cord as it trailed across the ceiling and down the wall to be plugged into the electrical socket. 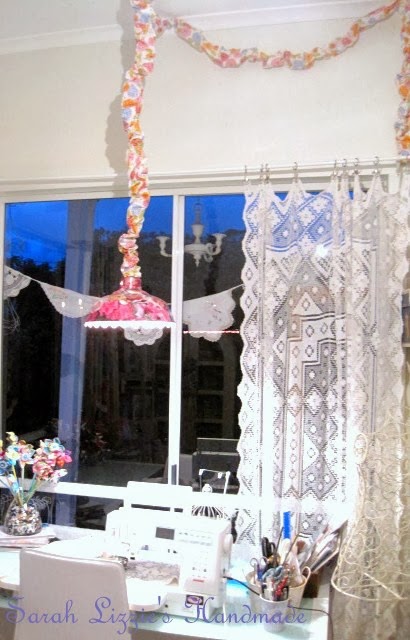 Aah yes.......not only does my sewing room have a gorgeous view of our garden by day; at night it also has the best seat for viewing the drama of the night sky. Here in the country, the theatre of the night sky is truly awe-inspiring. I am always in complete wonderment at the majesty of God's night sky! 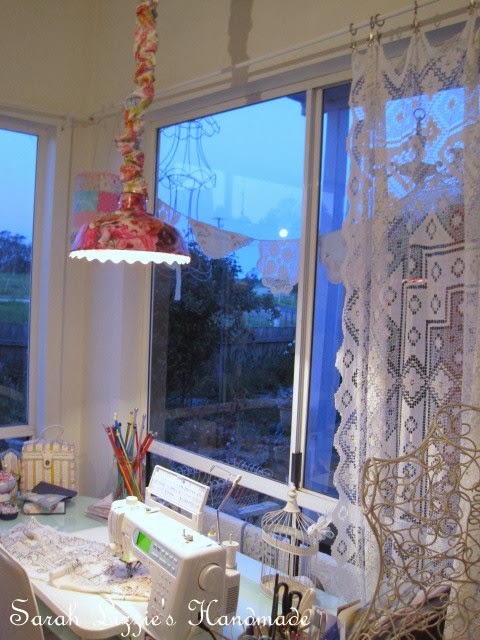 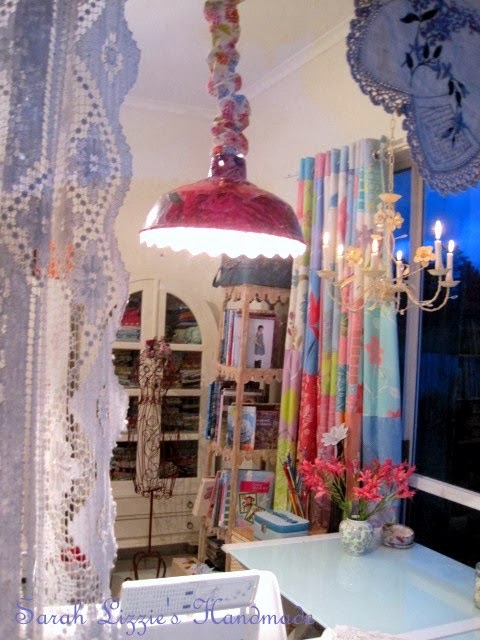 Now, not only is my sewing machine  illuminated with scintillant light from above, a light that indeed lightens my sewing path; I have one very funky light which, I think adds a certain whimsy and a bit of fun to my sewing room.
Posted by Kim at 6:04 PM