The Tale of the Dolly Peg

Far, far away in a land at the bottom of the world lived a dolly peg, whose name was Dahlia. Dahlia's tiny world was a sewing room in which the lady of the house spent her days stitching fanciful creations. Although Dahlia loved sitting in her beautiful tea cup which was delicately placed on a shelf, surrounded by fanciful and dazzling pretties; her dream was to one day be transformed into a beautiful flower fairy. 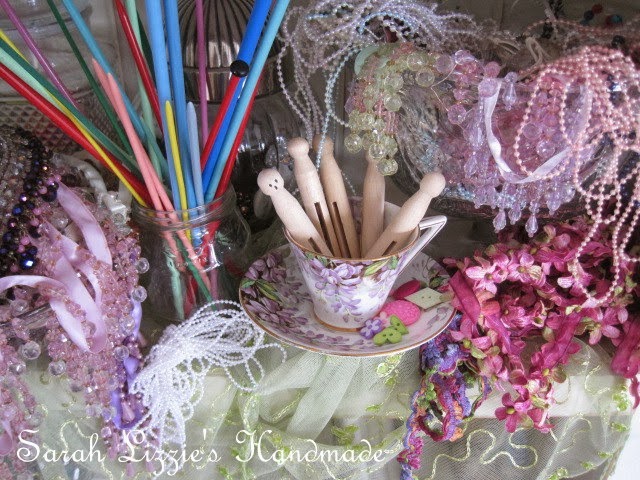 Dahlia had watched her friends one by one become beautiful flower fairies, under the spell of the magic fingers of the lady of the house. Dahlia had espied one of her friends, Sugar Plum, be transformed into a beauteous dancing flower fairy. Sugar Plum would have a famous ballet named after her, as she glided ever so softly across grand stages all over the world. 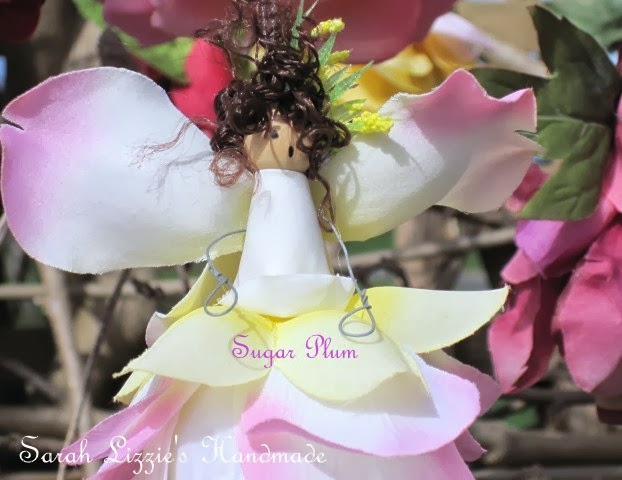 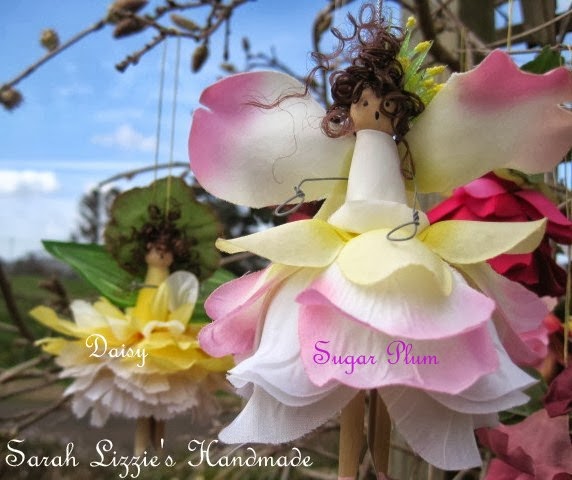 Dahlia quietly watched  her friends, Daisy, Blue-Belle, Rosie, Magnolia, Hyacinth, Cleomacaea, Violetta, Rosebud, Pansy, Sunshine, Florentina, Petal, Autumn and Fleur.............fairy after fairy; have stunning outfits created for them.  Couture gowns of diaphanous and delicate flower petals..... daisies, roses, zinnias, orchids, lilies et cetera; gossamer wings made of a smattering of leaves that helped her friends float ethereally into the air and to top it all off; sitting ever so pertly atop their mop of curly hair, oh so elegant and splendiforous millinery concoctions as their crowning glory. 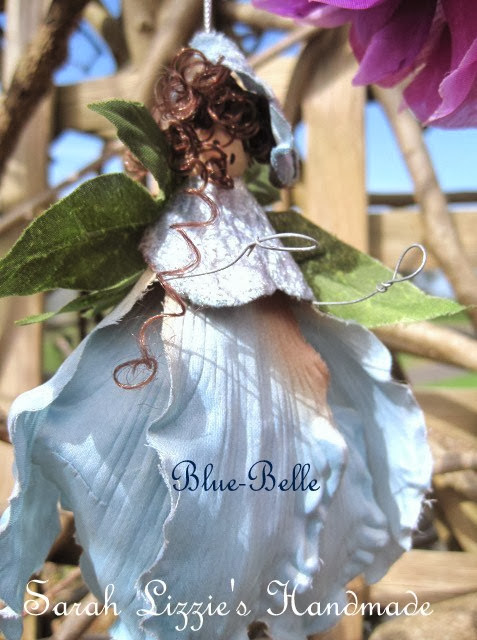 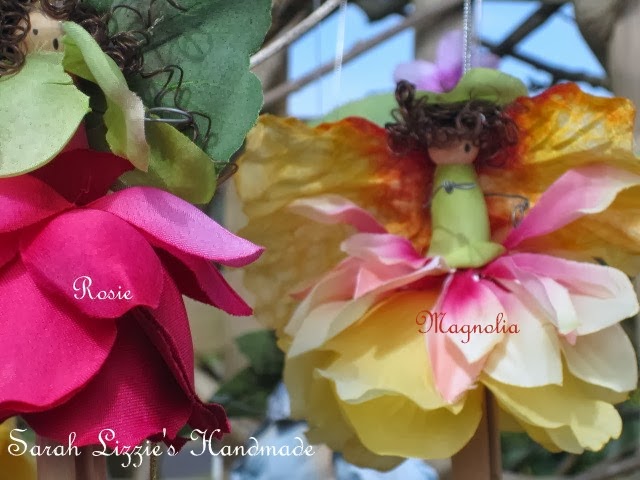 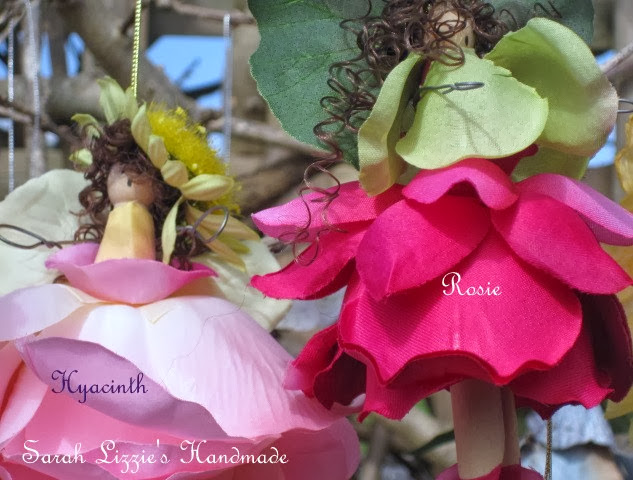 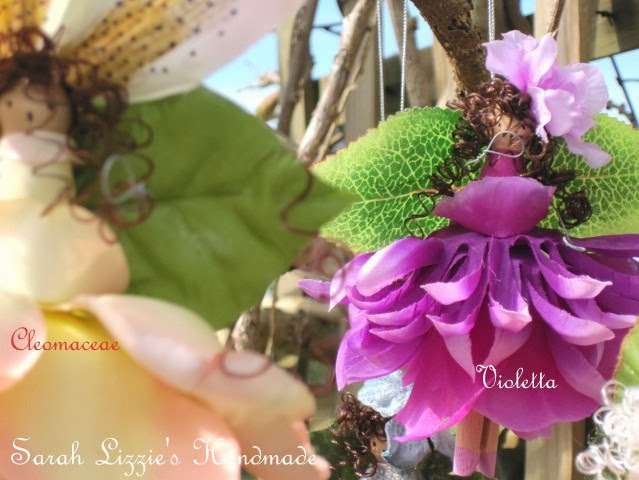 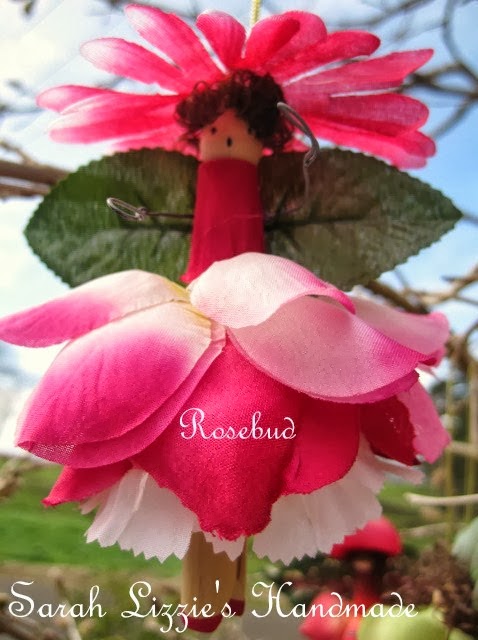 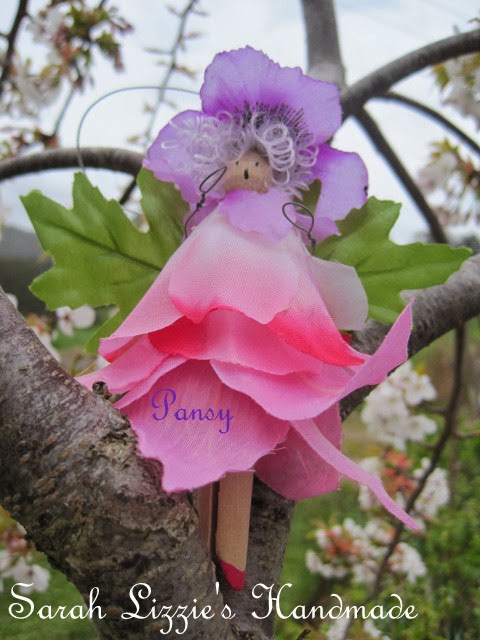 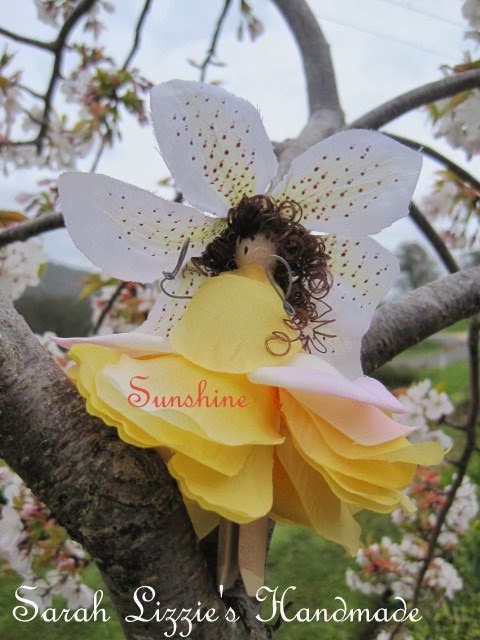 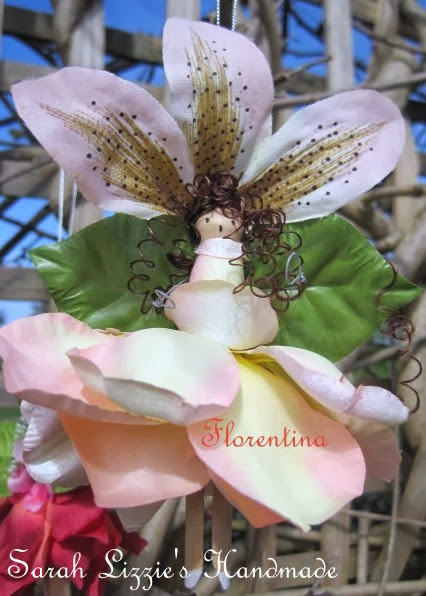 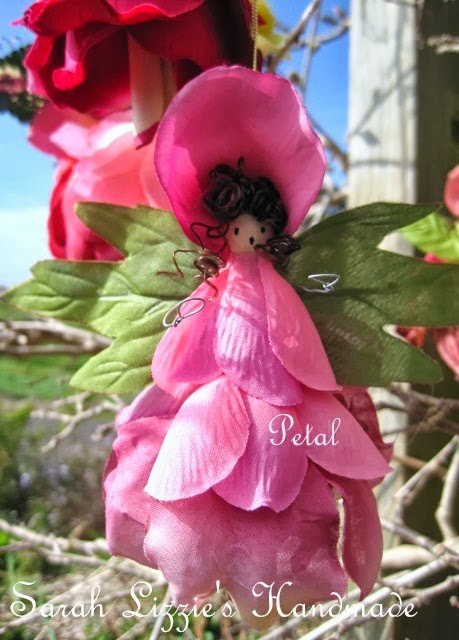 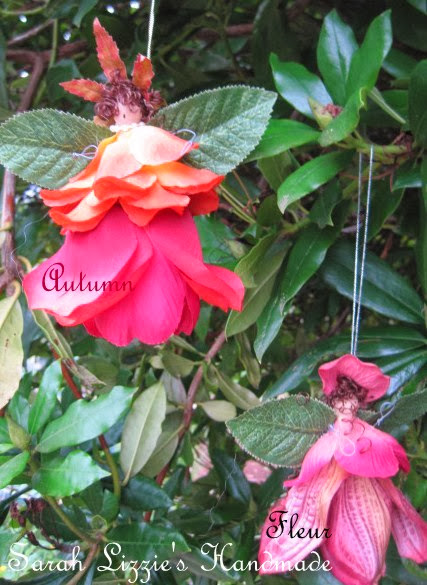 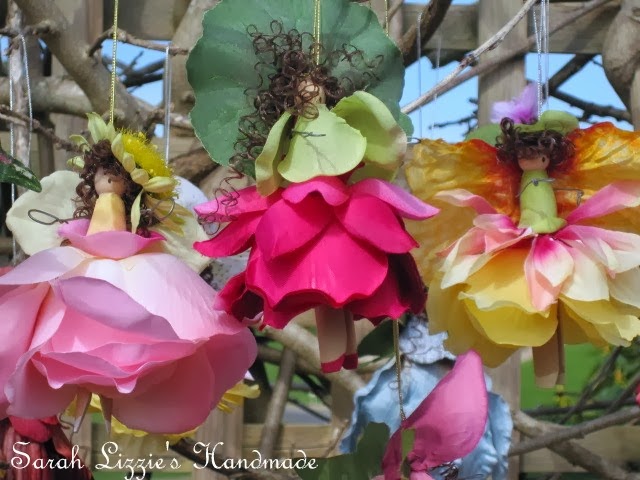 The lady of the house gained inspiration for the luscious fairy gowns, from her brightly coloured botanical hallway, as each day she strolled down the passage way to her sewing room. She loved flowers. Her garden was filled with bouquet after bouquet of the most deliciously fragrant and  rainbow-painted flowers.

Dahlia waited ever so patiently for the day when the lady of the house would make her long-held dream of becoming a flower fairy, come true. Day after day Dahlia watched the lady stitch creation after creation. She loved to see what the lady would dream up next. Dahlia particularly loved the chatter and giggles of the children who visited the sewing room every afternoon as they happily stitched away.

One day there was a sense of excitement in the lady's sewing room. The children were excitedly chatting about a school fair that was to take place in  a couple of weeks time. There was an edict from the King (the school principal) that a fair was to be held where there would be lots of stalls, yummy food, fun games and exciting things to see and do.

The lady of the house decided that she would have a stall and fill it with her handmade pretties to sell....(lure the throngs into her creative web and flog her wares to the unsuspecting public). The lady thought what a wonderful idea it would be, if she would make oodles and oodles of  enchantingly, delightful flower fairies so that the children could take them home to live;  playing with them. Dahlia was so excited that she nearly fell out of her tea cup. Perhaps, just perhaps her long held dream would come true.

So.....the lady gathered a slew of pink (Dahlia's favourite colour) petals, leaves and whatever else she needed to make flower fairies. She ever so carefully took Dahlia from her tea cup home and began to make Dahlia's dream a reality. 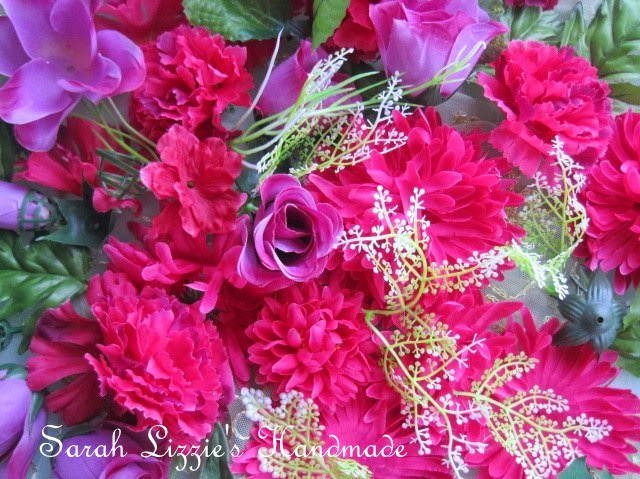 The lady painted small slippers onto Dahlia's tiny feet; after all, every self-respecting fairy needed pretty little slippers to adorn their tiny feet.

Now for the most beautiful frock ever to have adorned the mythical folk. A frock with a petticoat of layer upon layer of fuchsia pink, dahlia-like wispy thin petals, gradually adding white, mauve and creamy pink petals carefully plucked from an assortment of flowers. The lady snipped petal after petal so that they would fit Dahlia's tiny waist. 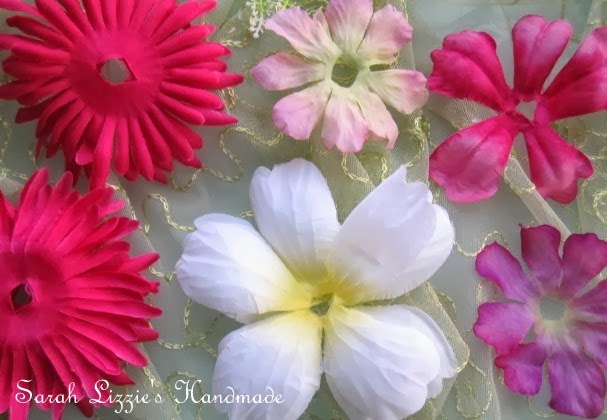 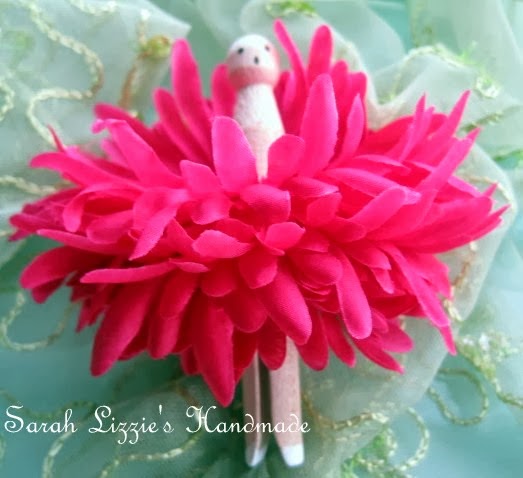 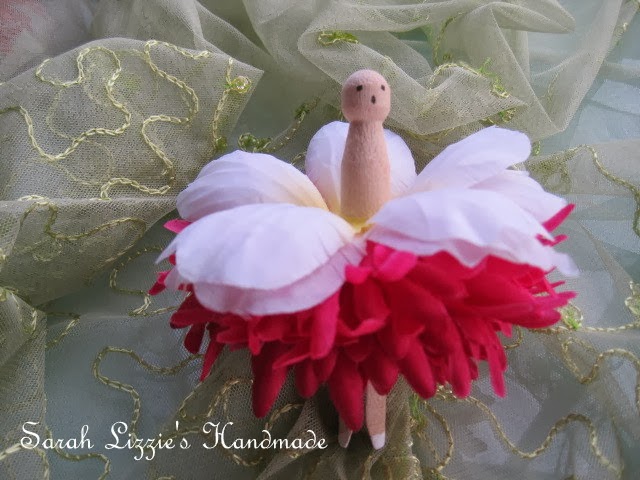 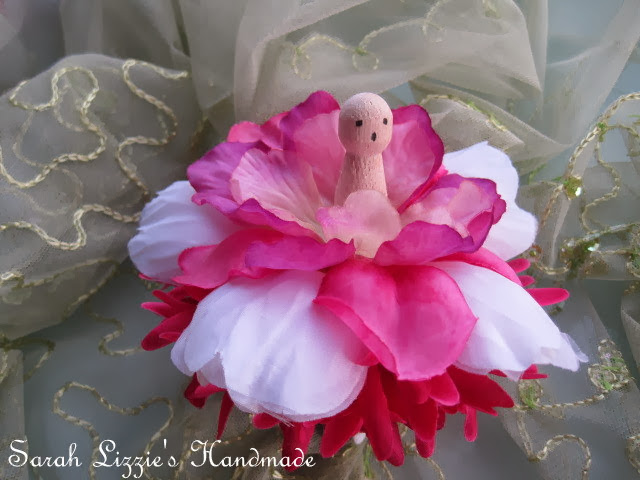 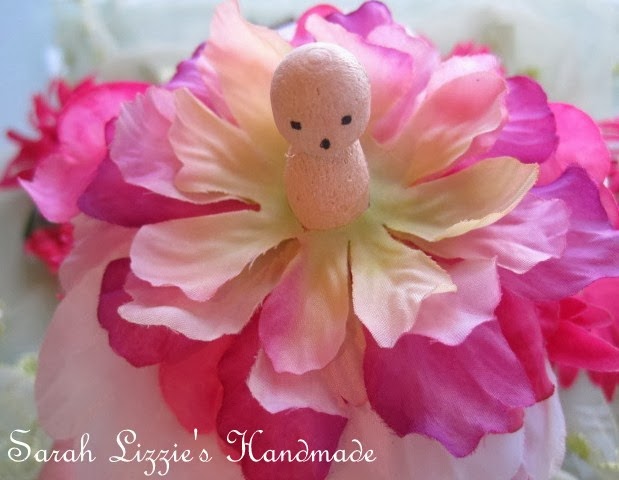 A single petal for the bodice was needed to be fastened to the skirt and a string of pearls for Dahlia's elegant neck.

Of course every fairy needs arms so the lady of the house formed some wire into the shape of arms and hands and glued them onto the body.

A mop of curly brown hair was affixed to Dahlia's pretty little head; upon which a pert little concoction of a hat, fashioned from varying petals was placed.

Last of all, what is a fairy to do if she has no wings with which to fly? After all there was much fun to be had fluttering and darting through the trees, playing hide and go seek with her friends. So........some wispy and delicate, fern-like wings were added so that Dahlia could become the fairy that she had always dreamt she would be. 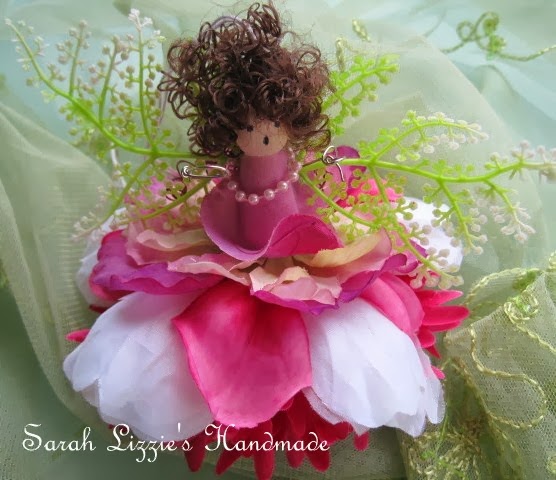 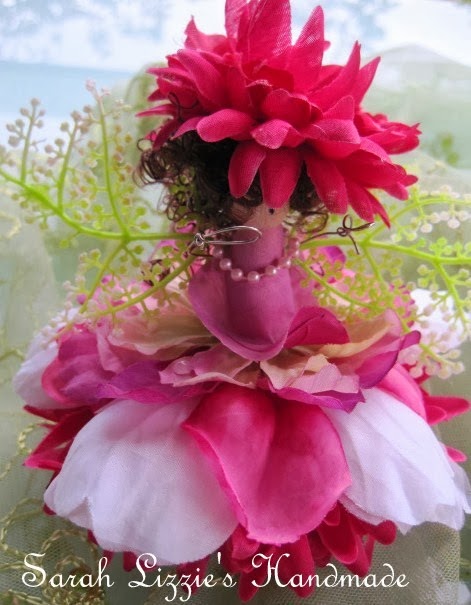 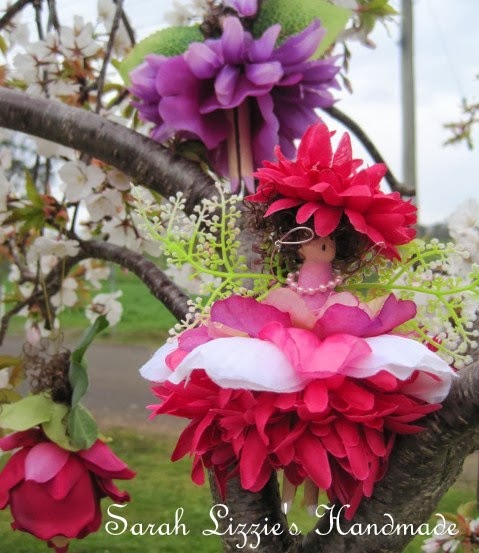 Dahlia was ecstatic with her beautiful ensemble. She thought it was the prettiest ever. She couldn't wait until the day of the fair. Although she would miss her pretty little tea cup and of course the toing and froing each day in the lady's sewing room; she wondered who would take her home with them. Would it be Holly, Akasha, Sophie, Pip.....or perhaps Alli?? 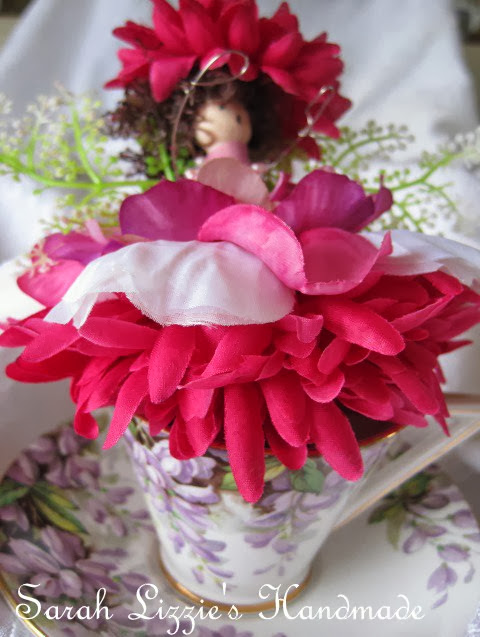 It didn't matter which little girl would take her home......Dahlia was as happy as could be that her dream of being a flower fairy had come true. She would live happily ever after in some little girl's home, where they would play together forevermore in the land of make believe.

Linking up to Stephanie's gorgeous 'The Enchanting Rose'.